NCCF along with PEFC successfully conducted PEFC Chain of Custody Auditors’ Initial Training 2022. The training was conducted online on 1st and 2nd September 2022.

The training was attended by 22 auditors and observers from different national and international certification bodies as well as the accreditation bodies.

The comprehensive training course covered the PEFC Chain of Custody standard, PEFC Trademarks standard, PEFC CB requirements standard, Accreditation requirements for CBs and ABs, and PEFC & CB engagements. The training was conducted for the Auditors, Reviewers and Certification Decision Makers. The initial training is mandatory for the auditors to conduct audits for PEFC CoC Standards.

Mr. AK Srivastava, Director General, NCCF started the session by welcoming all the special guests, trainers, and participants while giving a brief about NCCF, its certification schemes, objectives of the training, and the need and benefits of the PEFC Chain of Custody Certification. Mr. Rajesh Maheshwari, CEO, National Accreditation Board for Certification Bodies (NABCB), in his inaugural remarks, highlighted the emerging necessity of forest certification as an important tool of sustainable forest management and mentioned the ongoing engagement of NABCB and NCCF in the Forest Management certification and other schemes that NCCF has come up with. He also spoke of the significance of PEFC CoC certification for the legality of import and export of products from different wood-related industries.

Mr. Anil Jauhri, Chairperson, Certification Advisory Group, NCCF (ex-CEO, NABCB), praised NCCF for developing Indis’s first certification scheme and getting it endorsed by PEFC, giving the scheme an international recognition. He looked forward for the early endorsement of ToF certification standard by PEFC, which is reported to be at an advance stage..

There was a session on Accreditation requirements for CBs to operate on PEFC CoC by Mr. Anand Deep Gupta, Joint Director, NABCB, highlighting the accreditation system, different standards, conformity assessments, need for confidence in conformity assessment and its international acceptability, particularly in the context of growing trends in demand for CoC certification.

A session on PEFC and CB engagement was taken by Ms. Wikkie Netten, PEFC SEA, in which she covered the roles of participants in marketing of the PEFC schemes. She also mentioned the PEFC campaigns in sectors like Furniture, Rubber etc. and different communication tools for the campaigns.

The comprehensive training module was a mix of presentations, and case studies and trainees gained immensely through the examples explained during the training sessions encompassing the real scenarios in CoC certification. The trainers shared their deep knowledge in the subject and substantiated the same with their eclectic professional experience. The participants exchanged experiences and valuable feedback on the implementation of the standard.

Trainees will be required to complete an online Knowledge Test within 3 weeks after completion of the training.  Successful participation in this training would make the auditors eligible to conduct PEFC CoC certification audits, as attending a PEFC-recognized training is also a precondition to become a qualified auditor. For existing trained auditors, this training was an opportunity to update themselves on the underlying expectations, clarifications and interpretations related to PEFC Chain of Custody Standard.

In the closing remarks, Ms. Abhilasha, congratulated all the participants for completing the training course. In her remarks she mentioned that this training would help the auditors to be the driver for increasing the PEFC CoC certificates around the world. She also mentioned about the NCCF FM certification scheme for which CB can take provisional accreditation for 2 years from NCCF. ToF scheme is under endorsement process expected to be endorsed by end of year and CBs can take provisional accreditation for ToF scheme also. Additionally, NCCF ToF scheme is also part of TOFI project funded by USAID, which could help small landholders and marginal farmers to be part of certified supply chain. Trainings for FM and ToF standards are planned and scheduled to be conducted this year and interested CBs can take part in the training. The participants appreciated the quality of training and expressed keen interest in attending refresher training in the future to update their knowledge and skills. 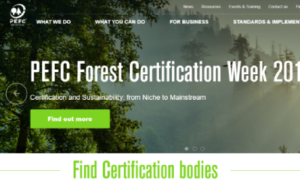